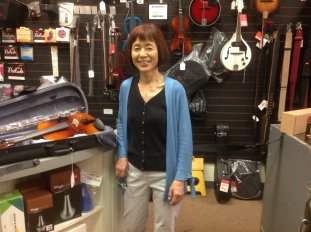 I began studying the Suzuki method for violin at age six. I also studied privately from ages 6 – 18 with the local violin instructor in Nagano, Japan. During high school, I played in student chamber groups. In 2002, I started to take private lessons again in NYC. I studied for six years with Ms. Kristina Musser Gitterman, who has been playing professionally in several orchestras, including Mostly Mozart Orchestra.
Since 2004, I have been attending the chamber music workshop, “Southampton Chamber Festival” in Long Island twice a year. I also attended Ocean Grove “Music, etc” chamber music camp last Spring. In 2005, I joined an amateur string quartet group in Manhattan and have been playing with them ever since. Mr. Daniel Gladstone is our string quartet coach and also he is a professional violin and viola teacher. I have been taking lessons with him since the beginning of 2009.

In 2007, I played in the orchestra of SUNY Albany conducted by Professor Werry. I also played in the Delmar Community Orchestra during that year. In 2008, I joined Sage City Symphony directed and conducted by Mr. Michael Finckel in Bennington, Vermont and have continued playing in.  I have been teaching at Hilton Music Center since 2011.