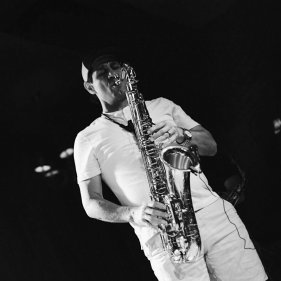 Suren Kyaruns was born in Turkmenistan. He started to study saxophone at ten years old. In 1993 Suren entreed the college of Donatar Ovezov where he studied with the art director of the band Gunesh, Professor Oleg Korolev, who taught him the Jazz fundamentals that also give hima beginning to his career. During those years he got inspired from meeting one of the most famous saxophonist, Stas Morozov, Evgenii Chuprun and the most memorable master class with Bob Berg in 1994. In 1997 Suren graduated from Turkmen National Conservatory as a jazz performer. He participated as a soloist in many festivals sponsored by the American Embassy in Turkmenistan.

His passion to learn different syles of jazz brought him to Yerevan Conservatory where he studied with the world known professor Alexander Manoukyan. After graduating the Yerevan Conservatory he entered to Yerevan Postgraduate School and graduated with Honors in Classical Performance. During his college years, Suren was participating in classical academic concerts with National Symphonic Orchestra of Yerevan and Jazz Big Band under conductor Y. Yerzinkyan. Suren had a pleasure meeting and working with Armenian Jazz celebrities ARtem Loloyan, Armen Husnunts and Vahahn Hairapetyan. He participated in many famous Jazz Bands of Yerevan such as Armadam, Aramaz and the Caps. Suren was part of Yamaha where he received Laureate of a third place.

Later on Suren moed back to Ashgabat, Turkmenistan where he continued performing and participating in many Jazz Concerts. Suren held a huge number of concerts for American, German, and French embassies where he met and played with Will Power, Chriss Bayers, and Zeid Nessir, Ari Rolland and the band Fun Horns. He created his band The Arvana that traveled to different cities around Middle Asia suck as Kazakhstan, Kirgizstan, Russia, and Armenia. His unique arrangements and compositions are a fusion of Jazz and Ethnic music that reached many hearts. Suren has mastered styles of Funk, Fusion, Ethno, Bepob, Hard Bop and many others. He loves sharing his extended multicultural experience and passion to music with his students. Suren was teaching woodwind instruments for the Jazz department in Tukrmen National Conservatory for three years, and also worked as a soloist and conductor of the Circus Jazz Orchestra of Turkmenistan. At the end of his last year living in Tuckmenistan he performed in two concerts where he played the Ch.Parker Time and dedication to John Coltrane in the first and second performatnce was one of the most difficult solos that was compsed by the greatest Tuckmen composer Redjep Allayarov wit hNational Turkmen Orchestra in memory to Nessimi.

All of his deplomas were evaluated and certified by California University (Foreign Credential Evaluation of Los Angeles.)