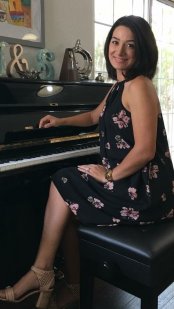 Susanna was born in Turkmenistan. She started her piano career at the age of five. She auditioned into a Specialized Music School under Moscow Conservatory and studied piano, music theory and music literature for thirteen years. Susanna graduated Turkmen National Conservatory as a piano pedagogy. She was an active solo pianist as well as accompanist to vocal and chamber music. Susanna performed a solo in a Symphony by Redjep
Allayarov, dedicated to September eleven and Rhapsody in Blue by George Gershwin, with Turkmen National Orchestra. Along with her piano skills she was also developing her singing and song writing career. She performed her songs across Turkmenistan releasing her album in 2002. In 2003 she moved to Armenia where she continued her music career. She performed as a singer in many concerts and in 2004 won a singing competition.

In 2005 Susanna moved to Albany, NY and two years later auditioned in to the College of Saint Rose where she got her Bachelor of Science in Music Education and graduated with Cum Laude. During those years she accompanied to Masterworks Choral, Chamber Choirs and performed as a soloist. Susanna was granted many scholarships including J. Robert Sheehan Music Scholar Award in 2009. Along with her performing career, Susanna has been working for eight years as a piano and vocal teacher at Hilton Music Center in Albany, NY. She accommodates her lessons to each student individually. By using her extended theory knowledge and her international and multicultural music experiences she has developed her own teaching style. Her studio held up to 48 students and most of them were encouraged to participate in music competitions, recitals and talent shows.

In 2016 Susanna and her family have moved to Los Angeles, California where she continued her teaching career in Hollywood Arts Academy and
Pasadena Piano Academy. Susanna became a member of Certificate of Merit of California. The majority of her students were participating in Certificate of
Merit. They were receiving high scores and were chosen into Honor Convocations. One of her student passed all of the ten levels, went through
advanced level and was chosen into Young Artist level. Teaching in California has expanded her views and techniques in teaching.

Besides her teaching career, Susanna has recorded two songs for the Vanderpump Rules Show. She had a chance to work with some great musicians
and composers during recording those tracks.